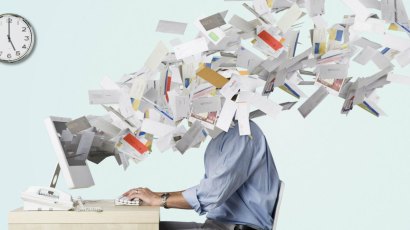 Every year, we think we have got this mass email thing under control only to find that it has gotten worse. For those in the performing arts presenting field, you know what I mean. For those who are not as familiar with this, let me give a brief explanation.

Those who are active in the touring performing arts—presenters, producers, agents, managers, artists, service organizations and consultants—consider attending conferences just like most other professions. In our case, that’s usually a few state and regional conferences throughout the year and the mother-lode international conference in New York in early January, APAP (Association of Performing Arts Professionals). When you register, you get added to a list available to all attendees. Then the communications start and continue year in, year out. In the past, that would mean dozens of mailers throughout the year, mostly leading up to the time of the conference. Now it means hundreds, but closer to thousands, of emails trying to pique your interest in what the senders have to offer. Thus begins the insane journey into email fatigue—sometimes welcome, sometimes not.

Here’s a special twist this past year related to APAP, though, that makes it even “madder.” Agents, artists, and managers (the selling side of the industry) started getting a flood of emails from other agents and managers—the same ones that presenters (the buying side) have gotten for years. The slight blessing is that the sellers now know what a deluge the buyers receive. The curse, however, is that it is souring what is generally a pretty darn rewarding, collegial process, even if it is acknowledged by many as “a necessary evil.” Crazy begins to get crazier.

For me, I am retired and a consultant, so no longer labeled in these lists as a presenter. I did get less this year, but still dozens a week as if I still had a season to book. That’s OK because some may think I am consulting on season booking, which I am not. But since I retired and my old email is defunct with all emails forwarded to a new email with a “retired” auto message sent to the sender. This means I get emails through forwarding from my defunct email as well as ones to my legitimately registered email. This helps me realize two things. First, which I suspected before, is that those emailing are not careful about building their lists to being with. And, second, is that they are not updating their mass email lists. On average, I get about 10 emails a day at my defunct email address in off-conference times, 20-30 during conference season, and not including the 700+ I just deleted from my junk folder that came in in the last 3 weeks. Plus, I get about 5-10 a day at my legitimate registered email, at least doubled during conference season. Evidence of ever-increasing madness and confusion, I suppose.

The solution? I know that many people are working on this including APAP, NAPAMA, WAA, PAE, AMW, and others. But the lesson learned here is that the sellers must do a better job in organizing their lists at the start. This certainly includes segmenting the lists they get originally to target those that have an interest in what they are offering, deleting duplicates, addressing bounces and unopened emails, and general clean up.

Provided lists are given by the conferences that include the type of presenter and hopefully the genres that interest them, the first step is relatively easy. Maintaining it is more tedious, I know, and involves going into your mass email service providers such as Constant Contact, MailChimp,  Zoho Mail, Vertical Response, etc. and looking at your statistics and delivery reports. If you are a subscriber of a service (some will require a fee), you will be able to check the bounces and the unopened emails. Bounces can be for various reasons from wrong emails to dead addresses to spam-rejected. Each service will also have suggestions and ways to reduce your bounce rate and increase your open rate. This generally involves sending individualized emails, templates of which each service will usually suggest. If your reports show repeated bounces or unopened emails from the same contact, take action. Do this annually, at a minimum. Here’s a concise article from Comm100 to check out. And here is an article, courtesy of LinkedIn (including the graphic in this post), that gives some great general email philosophies, including content, for everyone.

Like I said, this can be a tedious, time-consuming process. But it’s worth it. In any profession, the more emails we receive that are irrelevant, the more likely we are to ignore them or mark them to go to our junk folder. Email fatigue is real and can turn recipients off to specific senders or all email in general. In fact, I feel this fatigue is making regular printed mailers more effective, albeit a significant budget drain that senders thought was behind them. And if you are emailing other sellers, you are hurting your reputation among your colleagues.

If you have any other suggestions, ideas, or general thoughts on this subject, share them and let’s discuss. Let’s get this madness under control as we continue the quest for perfection.